One of my oldest friends, was master painter Milford Zornes—oldest chronologically because he was 100 when he died, and longest known because he was one of my father’s first patients in 1951 when my parents opened their office in Pomona, California. I worked in my parents’ office so I used to usher Milford to the treatment room and make up his herbs. Milford had been suffering terribly with stomach problems with no relief from conventional medicine when his wife, Pat, saw one of my dad’s ads in the paper and advised Milford to try “that Chinese doctor.” He told me the herbs took care of his problem so he was happy to take them though they were “bitter as quinine.”

I knew Milford for over 50 years, attended both his last painting workshop on his ranch in Utah and one of his first. My parents bought his watercolors for the walls of their offices. Once when I was home from college, my dad said, “Milford has an exhibit down at a gallery in Claremont. Go buy something.” So I brought home “Morning Sun” for $150. For 45 years I’ve kept it, through many moves and many circumstances. Now it hangs over my baby grand piano and I love it still. Really good art is like that—you never get tired of it.

Milford told me that each painting tells a story. I looked at the paintings on the walls of his front room and replied, “Your pictures say, ‘Life is hard but it’s worth it.’” He nodded. “Yes,” he said, rubbing his chin. “I think they do.”

Early in his career, after he had become famous as a member of the California School (or “California Style” or “California Impressionists”) who changed painting in the 1930s, Milford gave up a teaching position at Pomona College to be a painter. He was prolific, selling his work at reasonable prices, always aware that he had no safety net. Towards the end of his life, he told me that his colleagues had been wiser in their choices. They had security—comfortable retirements. But then he started telling me how neither he nor Pat fit in at the college functions. The first year, they were invited to everything. The second year, to about half. The third year, almost none.

I told both of them that I believed they had made the best decision for themselves. There’s something different about being a professor who also paints verses a painter whose sole income depends on whether his pictures sell. Every day you make choices in your work. Will I paint California missions because there’s a huge market for it? Will I continue to paint this style of tree because everyone likes it and knows immediately it’s one of mine? Will I paint only California watercolors because that’s what I’m famous for?

I have 15 Zornes paintings, many of which I’ve looked at every day for years. Though they date from the Forties to the new millennium and are varied in medium, subject, and style, they are always recognizably Zornes. He said self expression is not something to seek in your work, but communication—working to tell the truth of the subject matter in the lines you distill from long, careful observation—that’s communication. He never imposed a style on the subject; he always let it tell him what it was. And he painted it “as it would be if it could tell you what it wanted to be.”

I believe Milford’s work is better because of these daily choices. It shows in his growth and development as an artist and in paintings that have depth and integrity. He was impatient with those who wanted to philosophize about his pictures, searching for meaning beyond the yearning grope for The Truth of the Matter with which he approached each piece. I don’t mean to philosophize. My interest in the effect of his choice to be a painter instead of safe has ramifications for me as a writer. I have no safety net. I’m not writing sex and violence. I’m groping for the Truth of the Matter, letting it tell me what it really means to be if I’m willing to listen.

One last thought. The Chinese value specific virtues, and each virtue is symbolized in the natural world. Bamboo represents the ability to bend with the wind, but it also is hollow—able to receive. It’s not “full of itself.” Another way of saying it is “a black belt with a white belt mentality.” It means you’re willing to be taught. You don’t think you know everything there is to know, even about your own area of expertise.

I  made a special sketchbook for Milford. On the cover was one of his sketches of horses and riders (one of my favorites) and inside was smooth, creamy white, archival, 70# paper—stab bound and tied with raffia the color of wheat. On Milford’s 95th birthday, I presented it to him. He examined the cover, ran his big hand over the luscious paper within, closed the cover, reverently held the sketchbook to his chest and said, “I hope I don’t mess it up.” He meant it too. 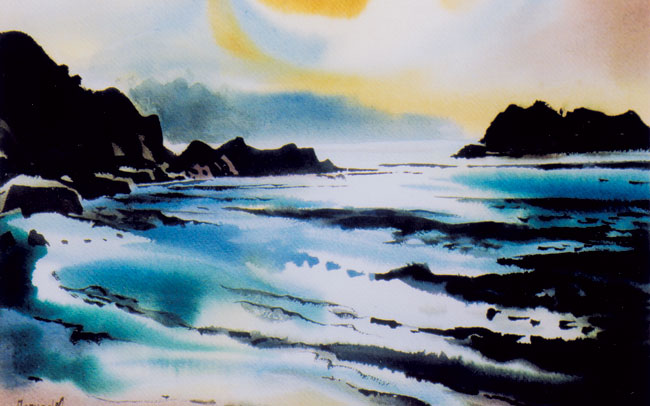 The Zornes-Baker Connection   Hedy on the Treadmill