A new Music page has been added to this site. Hooray! You can get to it from the menu above. There’s also a link at the end of this post. Here’s the story behind The Battle Belongs to the Lord and its long journey to your ears:

It’s been thirty-two years since I met Pauline Michael Mills, the first person to write a Scripture chorus. She was about eighty-two and bright as a little bird. It was the night before Easter Sunday, 1979. I remember it well because my friend Sharon and I had been asked to do the special music for the Full Gospel Businessmen’s meeting. I’d never been to a FGB meeting and didn’t know that we weren’t the whole program. How chagrined I was when Sharon and I had completed twenty-minutes of music only to discover that the reason the President had been trying to signal us to stop was because there was a speaker waiting for her turn.

As Pauline took her place behind the microphone, I could feel the anxiety in the audience—mine included. What would she say?

“I can always tell when I’m in the presence of musicians who are of the Guild of David,” she said in her tremulous voice, “and these girls are two of them.” Relief swept over the audence.  Then Pauline launched into her own, energetic presentation, singing at the top of her elderly, yet stirring soprano voice, fingers flying over the piano keys with joy.

At the end, after everyone had thanked her and shaken her hand, she made a point of coming over to Sharon and me. “I’d like you girls to join me tomorrow after church. We were stunned. Pauline Michael Mills was inviting us to spend Easter with her. Wow! Why?

Seated in her motel room, Pauline wasted no time in small talk. She explained that a reliable prophet had said that worship was going to become more popular than Contemporary Christian Music, but the Body of Christ was going to need songs that were NOT worship. They would need Scripture songs because it is much easier to memorize the Word when it’s put to music, and these choruses would pour out of their hearts and encourage them when the road is hard and their brains shut off. “He said there would be need for songs for the soldiers—to help them keep marching. I charge you girls to write those songs.”

I was shocked. Contemporary Christian Music was the rage. Record companies could barely keep up with the demand for this new young sound in the styles of the modern age—folk, rock, and heavy metal. How could worship become more popular than that? But I accepted the charge. I figured if the guy was a false prophet, nothing would come of it and he, by Old Testament standards, would be discredited (since that, and not stoning, was the modern consequence of false prophecies).

Sharon wrote one right away—Psalm 117, “Praise the Lord all ye nations. Praise the Lord! Praise the Lord!”—a brave and lovely little chorus. I had never written a song in my life. Never even tried. But I typed Scriptures that I thought would be the best for the task. Psalm 91 was the first. 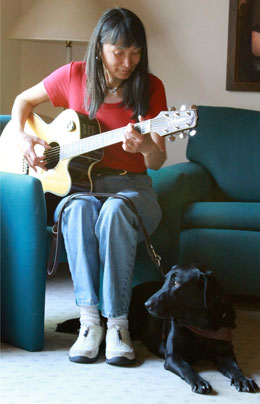 Every day I sat with my guitar, cards spread out before me. For at least an hour I tried. I got nothing. Zippo. Nada. After a full year, I told the Lord, “I’m sorry. I tried. Every day for a year I tried. I just can’t do it.” I was looking out the window in defeat when I began to hear the music—”Thou shalt not be afraid for the terror by night. Thou shalt not be afraid for the arrow that flies by day…”

Shortly thereafter I had about two hundred songs.

I recorded this album in 1990 on a little 12-track recorder and the help of my friend Dale Enstrom who drove two and a half hours to my house to put his lyrical color on my tracks. The album was completed in three weeks. I printed the “J” cards, cut and folded them myself, fitting them into the little plastic boxes that held the cassettes. I called it “The Battle Belongs To The Lord, Songs of the Soldier #1” because I still had a lot of songs to go.

It is now twenty-one years later. No more analog. We have digital media, internet, downloads, uploads, offloads, and phones that can send video directly to YouTube. It’s a different world. My life is different. I am different. Even this little old album is different. It’s been completely remastered (resurrected) by Earthen Vessel Productions’ Recording Engineer, Dan Worley, from an old cassette tape which had quality degradation and very low signal levels.

Several years ago when I was listening to some fabulous choruses (from the collection of Time-Life’s Best Worship Songs Ever), I was wishing my choruses could be a blessing the way those songs were to me. The Holy Spirit whispered sweetly, “If you want people to hear them, you have to send them out first.” It is now possible to send them out—on my brand new website. And, since that prophecy of long ago has been fulfilled, I figure it’s time to share these songs—and I am doing so with great joy.

The Battle Belongs To The Lord, Songs of the Soldier #1