When I was at guide dog school, one of the sessions was on “The Public”—what kinds of things to expect and how to respond. After we graduated and I actually started taking Hedy places, I was truly astounded at the encounters that occurred, and how frequent they were. That’s why I was so delighted when I started talking with those hearty volunteers who raise puppies in preparation for their training as guide dogs. They had encounters too—lots of them—and they met them with aplomb and grace.

This is from Jeanette Frey, a puppy raiser from Kelseyviile, CA. 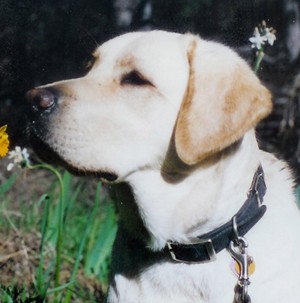 I had to go to the store, so I got Fallbrook ready, fastened him into his green ID jacket (it says “Guide Dogs for the Blind, Puppy in Training” in big white letters), and we loaded up into the truck. Off I went with the ten-month-old yellow Lab pup sitting beside me. When we parked in the lot at K-Mart, I got out the driver’s side, grabbed the leash and Fallbrook followed out behind me. We preceded to walk through the parking lot and towards the door. A man standing there watching us said, “I didn’t know they let blind people drive.” I said, “They do if they have a guide dog to help.” He got a strange look on his face, so I told him I was just kidding—I was not blind and this was a “puppy in training.” He seemed relieved to know there were no blind people out driving on the streets.

Fallbrook graduated Oct. 7, 2006. He was Jeanette’s second puppy. She is now raising her eighth.