On Joy and Hope

I admit it. I was burned out. Even though I loved what I was doing, I had been hitting it hard, striving for certification in The Emotion Code in the six months allotted to meet the requirements. First I powered through the coursework, feeling like a steeplechaser jumping hurdles as I faced each section’s tests, then celebrating briefly when I passed the 100-question final. After that, it was client after client to complete thirty treatments including four dogs and clearing four heart-walls. Heart-walls took the longest because they usually require anywhere from two to six sessions to release a lifetime of trapped emotions shielding the client’s heart from heartbreak.

But I did it—met the deadline with two months to spare. It was exhilarating work, rewarding and surprising, but I was tired. I was hoping the two family gatherings Dan and I were going to attend back-to-back would be a vacation,. I submitted my documentation to the Emotion Code certification team and left.

Dan had promised that I didn’t have to attend every function of his family reunion, so I packed some paint brushes, watercolors and tablets of paper, and chose to spend Tuesday afternoon painting in the back yard. It wasn’t very good. My right brain, which is where rest, restoration, color, savor, and delight happen, was shriveled like half a desiccated walnut from years of neglect. I kept trying, though, and on Friday morning, I did one painting I liked.

A week later we drove back into Lake County, having missed the 5.1 earthquake, but just in time to unpack before the Clayton Fire began the next afternoon. Smoke rose like a stalk of brown broccoli and quickly spread. It was just under a year since the Valley Fire began, and we still feel the worry. Would there be another early morning evacuation call?

Lake County was bewildered and alarmed, but good news came—an arsonist was arrested and charged with starting seventeen fires. Relief was palpable.

Meanwhile, the summer Olympics was in full swing. I watched Simone Biles astonish the world.

On Wednesday, my friend Stephanie told me about a Wall Street Journal article about Biles that she had just read. “She has the same coach that she’s had since she was seven,” Stephanie said, “and she has a most interesting coaching style. If it’s a choice between the birthday party of her best friend and practice, she says Simone goes to the party. Where most gymnasts do ten vaults a day, Simone might do ten a week. She says Simone lives a normal life. Moderation. When they’re getting ready for an event, they talk about silly stuff. Simone doesn’t sit with a towel over her head getting into the zone. Most of all, it’s about joy—of keeping the joy in gymnastics and in life.”

In all my years of watching Olympics, I’ve never heard anything like that. It’s always about sacrifice—relentless pursuit of excellence—training, early mornings to late at night, no days off ever, and eyes on the gold. Sounded reasonable to me. Sacrifice, discipline, pressing hard, foregoing all but the one thing—and practically the only thing that matters. That’s what makes champions, right? Sounded true to me. I’m Chinese. Joy? What’s that?

On Thursday, word came from Diana, my Emotion Code case manager, saying I had met all requirements. My certificate would be coming soon. I celebrated by taking the rest of the week off.

Friday, Dan set up a long table for me in a downstairs room I call The Cave. It has banks of daylight balanced florescent lights and is the coolest place in the house. I took my tablets of paper, the same brushes and paints, and my dog and sat there unable to have a single creative idea.

Sometimes you have to prime the pump. When in doubt, I draw horses. Entertain the right brain with color and shapes. Nobody has to see it but me. Anything I don’t like can be thrown away. I have nothing to prove. This is not for show or for sale. This is for joy.

Yesterday I “painted” for two hours and finally got two honest ideas and one painting I liked. Today I painted for an hour and a half, working on an idea that came yesterday. Today I worked out some of the problems and found a place of rest. It’s a picture of my kitty Hope and me sitting on the piano bench side-by-side. It’s one of my favorite things she does, pawing the keys sometimes in harmony and appropriate rhythm with what I’m playing.

I like this picture because I changed the decor, the colors of the room, even the rugs. I had freedom to make it what I wanted it to be, not slavishly trying for perfection or realism. It captures the feeling of an afternoon together, all the more precious because Hope is very close now to dying. She has not eaten much in a month, and she is drinking less each day.

For the past three days, whenever Hope comes out from her hiding place, I lie on the floor near her, just be-ing present, not anxiously trying every configuration of foods that might entice her, not pleading, “Please, please drink!”

I don’t think I’ve ever known how to just BE. There was always another book to write, another person needing care. Now I find I can lie near Hope asking nothing of her, simply loving her. And I feel her loving me back.

In this lack of striving, working, doing, there is Hope. There is peace. Rest. And joy. 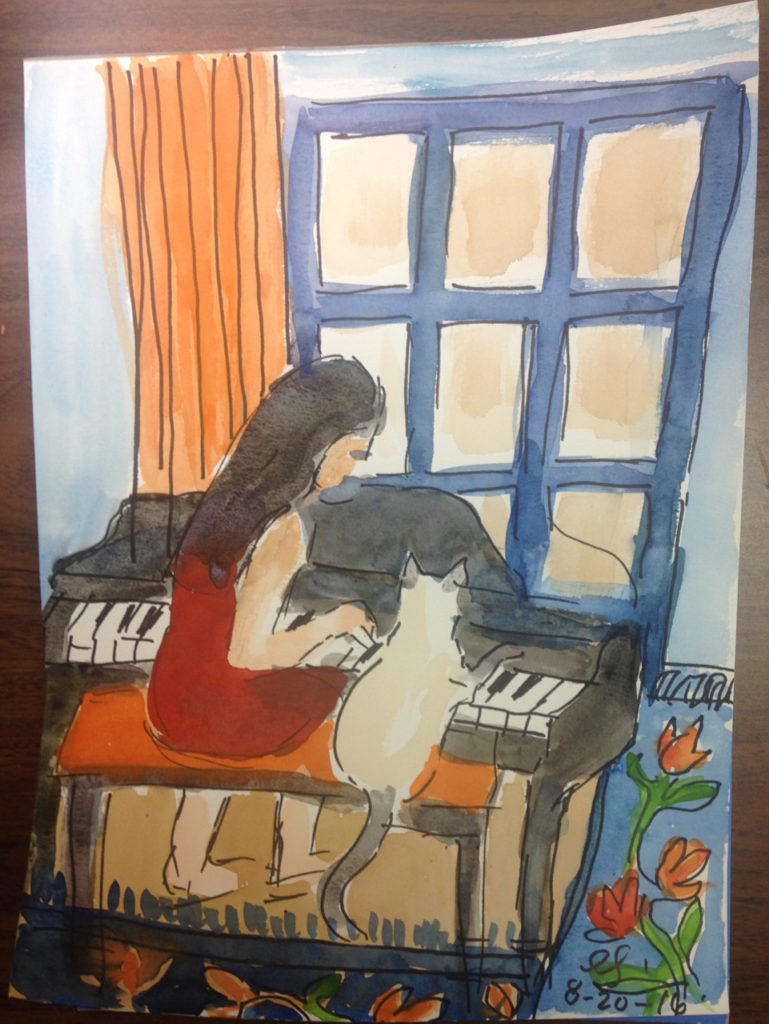 Seeing Stars   After 3 Days in Vegas, Carolyn and Dan Take the Plunge