On this day, Milford Zornes’ birthday, I’m posting the first of many stories from Hal Baker.

“One day when Milford was ninety-eight years old, he had his driver John Meanor (my friend since 5th grade) drive him to an art supply store in Glendora. While they were there the owner showed Milford a brush that was made from Russian sable. The price on the brush was $500. Milford looked at it, studied its balance, the spring of the sable, the carefully trimmed tip, handed it back to the owner and then John and Milford left. Milford got to the middle of the street and told John he needed to go back to the store. He had the owner get the brush out and Milford looked at it again. He said, “I am going to do a demonstration on my 100th birthday and I intend to use this brush.”

Milford told that story at the demonstration and did use the brush. He just didn’t use it much. I think he liked a lot of his cheaper brushes much better but he liked the story of the brush and used it. The brush is now encased in a frame along with a photo of Milford doing the demonstration painting with it at the Pasadena Museum of California Art at his 100th birthday celebration.

Two things intrigue me about that story. One is that Milford—who told me often he was from two of the most frugal races in Europe—bought that expensive brush and then hardly used it. His daughter told me he chose to use his old favorite—a more familiar entity.

The second is that Milford bought the brush for the demonstration painting when he still had two years to go. I remember when the hard back, full-color book that Milford, Bill Anderson, and I had been writing was about to go to press. Dan was putting the finishing touches on the layout when Milford suddenly called up and said, “We have to change the title of the book. I don’t want you to use ‘To Be a Painter.’ I want to save that for another book I want to write later.” He was 95 at the time. After Dan got off the phone, he remarked to me, “If I ever make it to 95, I hope I’m still making plans and looking to the future like Milford does.”

My own dad lived to be 95, and his neighbors told me they saw him tractoring his yard the morning of his death. He was still inventing, still calling friends and family and sending us emails about ways to survive the beleaguered economy. What gave these two men the ability to think into the future when others half their age feel life has passed them by? Maybe it’s “Life is hard, but it’s worth it.” You don’t expect it to be easy, but you keep looking for the truth of the matter and you face it unflinchingly when it comes. And if you get close enough to see your hundredth birthday just 24 months away, you might allow yourself one small indulgence—a luscious Russian sable brush—though, when it comes right down to it, the old, favorite brush is the one you choose to use, because, in the end, communicating truth on the paper in front of you is more important to you than celebrating your own acclaim.

Maria Zornes: This is the brush photo. The brush on the right is the one he bought for $500. 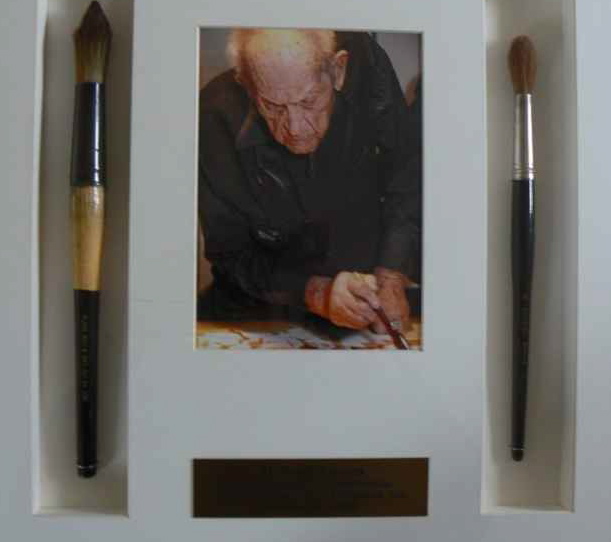 The Promised Painting   The Zornes-Baker Connection