I was standing before a green wall of produce at the Ukiah Natural Foods Co-Op, trying to decide which leaves looked most like Romaine when I noticed a little pulling on the leash in my hand. Startled, I looked down and saw someone crouching next to Hedy, petting her head with great affection. “Oh! Please don’t pet her,” I said with the alarm that always colors my voice when I discover someone distracting my guide dog, “She’s working.”

The man stood up—thin, wiry, with bright white hair and beard and a friendly, good-natured face. “I’m sorry,” he said. “I didn’t know. I’m a vet, and in all my years of practice, no one has ever told me not to touch a guide dog.”

How could it be that no one told him in twenty or thirty years? I supplied the jaunty veterinarian with several brochures on guide dog etiquette that I got from Guide Dogs for the Blind and suggested that maybe the other handlers hadn’t said anything because it was hard to tell a nice person, “Don’t touch the dog.” He said, “But you have to tell them the truth. That’s the most important thing, don’t you think? It’s better for everyone if you do.”

He was right, of course, but it’s one of the hardest parts about being a guide dog team. Later, as I paused at another aisle, a darling little dark-haired girl shyly asked if she could pet my dog. She was already advancing, hand outstretched when I told her that the harness on the dog meant it was working and has to pay attention to its job. She never took her eyes off Hedy as I spoke, and hearing my answer, she turned immediately and hurried back to her father. He gently reinforced the message. I was grateful for that, but she was such a sweet little thing! I felt so bad. If I’d had the time, I would have added, “But when I take her harness off, she’s just a dog.” I would have removed the harness and taught her how to approach a new dog. But that day I had a driver who wanted to leave. When I’m paying the driver, their time is mine. When it’s a friend, I’m on their time. It’s one of the biggest bummer parts of not being able to drive anymore.

The Public is full of dog lovers, and Hedy can always tell. They spot her and make a point of coming to visit. “Oh, you’re so pretty! You look just like the Lab I used to have.”  I’ve even had people clap their hands and call to Hedy while we’re walking fast down the street. They don’t realize how dangerous that can be for me. What if someone yanked their steering wheel while they were driving? Wouldn’t they want the person to stop? 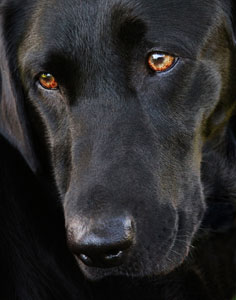 People don’t know. They just see the cute dog (and Hedy really is VERY cute). They don’t read the sign on her harness that says, “Please ignore me, I’m working.” They look at her adorable face and reach for her. I always feel so bad about telling them not to. First, I don’t want to hurt their feelings. Second, sometimes they get mad. One man kept petting her anyway, growling, “I don’t care. I’m going to pet your dog.”

Some guide dog handlers have no problem letting people pet their dogs. They’re probably better at managing their guide than I. Or maybe their dogs are less distractible. Hedy is a sniffer, a swerver, an assertive little thing who is curious about everything and a bit of a social butterfly. I have to be strict or every time we go out she’ll think it’s her time to make new friends. She’d be a wonderful tool if I wanted to meet people, but she’d be worthless as a reliable guide.

On the other hand, there are a number of parents who tell their children in low, tactful voices, “That dog is helping that lady see, so don’t talk to it. It’s doing its job.” I tell them, “Thank you so much!” and if I have time, I take off Hedy’s harness and let them meet her.

I suppose the one person who has most helped me speak up when people distract my dog is Tracie, who works at the Natural Foods Co-Op. As I was checking out one day, she commented on the beautiful dog and added, “But I know I’m not supposed to talk to her or touch her or anything.” I commended her and thanked her, saying that she was rare among the population, whereupon she replied that she had had a blind roommate who had a guide. Tracie started to pet the dog and her roommate stopped her. Tracie said she was upset at first, but after her roommate explained that the dog needed to stay focused in order to keep her safe, she was glad.

Tracie’s story has helped me be willing to risk the wrath of the petting public in order to educate them in the no-pet policy. But it’s still hard. I like peace, harmony, togetherness. It sounds so unfriendly to say, Please don’t pet my dog,” but maybe if I do life will be easier for the next guide dog team. In life there are many hard things that we don’t want to do. Nevertheless, as the friendly vet said, “You have to tell them the truth. That’s the most important thing, don’t you think? It’s better for everyone if you do.”

A Gift of Kelly   The Bonus Benefits of Cooking