I stepped carefully over the log, my foot finding a flat place on the trail. I stole a quick glance to my right. The pale dust dropped abruptly into the vast dark emptiness. No safety rail. This isn’t Disneyland. “Mule dung. Stay right.” My eyes snapped back to the narrow path ahead of me. Dark potato-shaped droppings contrasted well enough with the dust that I could avoid them easily. I held Hedy’s leash short and high to keep her from investigating further. On my right, I held onto Dan’s elbow. He was looking ahead, describing the next obstacle, all the time keeping vigilant guard lest I stumble toward the edge. He did not tell me that, the night before, he had dreamed I fell over, my eyes wide with the shock of unbelief: This can’t be happening to me!

We had been descending for quite some time, the sharp switchbacks alternating the drop off from one side to the other. “How far are we going?” I asked bravely.
“Until I don’t think it’s safe anymore,” says Dan. So we kept going down. “Step up. Rocky steps. Loose rocks here. Watch out.” My ankle turned a little as my sandal slipped on a rounded stone.

“Come to the right. Let these people pass.” I inched over, pulling Hedy’s rear end as close as I could to my side. The young and strong, jaunty in sturdy boots and hiking shorts, thanked us politely in accents from around the globe. Their backpacks and hats disappeared around the angle of cliff face. Below, tiny black shapes moved across the canyon, surefooted as mountain goats. There I was in raincoat and sandals. I had not planned on hiking down an interior wall of the Grand Canyon, but when we arrived the day before, we had seen the canyon from one of the rim trails. Dan was impressed, but I couldn’t see much—just patches of sun on cliffs and big, dark shadows. “I want to go inside it,” I said. “I want to touch the walls and feel the rocks up close.”

“We’re going down there,” Dan declared, gesturing toward a distant final destination, Ooh-aah Point on South Kaibab Trail. People were dots like gnats. I nodded, slipping slightly on the uneven path. Hedy’s taught leash pulled me back into balance.

My legs were already tired from multiple sets of log-edged steps, but I figured I could make it. We just had to stop more often. I had nothing to prove to the young whippersnappers who strode along nonchalantly as if they were on level ground. What concerned me was the ones coming back up. Young and fit and panting, they gladly stepped aside for us, saying they were happy for the excuse to rest. Really? And I’m three times your age? Maybe there will be a helicopter we can summon from Ooh-Ahh Point.

The last steps were very steep. They reminded me of the steps to the watch towers on the Great Wall. More than 45 degrees. It had been difficult, and I was thirty-six years younger then. But we kept on, Dan’s patient instruction, my diligent plodding. I was not holding Hedy’s harness handle because she tended to pull (that’s what guide dogs do in harness), not realizing I could neither keep up with her nor maintain my balance, so I held her on short leash and she steadied me with her four-paw drive.

Then we were there at the end of our downward trek. I figured it was named Ooh-Ahh Point because that’s what people said when they got there. There were little areas that extended over the open cavern below. Dan settled me on a rock and told me not to move. He took pictures of Hedy and me, and another hiker took a picture of the three of us together. Then we let someone else have the rock and busied ourselves rummaging in my backpack for food. I poured a little water into Hedy’s collapsible bowl. She drank it and lay in the shade flat on her side. I drank a little too. The bottle was almost empty. I was conserving, concerned about the trip back.

We took more pictures. We congratulated ourselves. And we started back up because the sun was getting lower and we had a long way to go.

The steps leading from the Point were steep. Each one required quad strength. Hedy had to leap up some of them. I leaned on Dan’s left arm. This was only the beginning of the ascent. How was I going to make it back up? I told Dan we had to stop more often. I just couldn’t keep climbing. He said he didn’t like to stop because then his muscles didn’t want to start working again. I knew I was getting dehydrated in the heat, even though he was carrying my coat along with everything else. We stopped to rest. I gave Hedy a little more water. Took a sip myself. Dan said I could have his water, but I knew he didn’t have much left either. I seriously wondered how I was going to make it up when every step was a trial to my already exhausted muscles. I knew the feeling. I needed more water.

But as I sat wondering whether I would have to be carried out, along came a man wearing the colors and emblems of the park. He asked how we were doing. Asked if we were okay. Did we need any water? He had been repairing the trail and was heading back. Said he had 2.5 liters in his backpack. I asked if he could put some in Hedy’s bowl. He filled it up. She drank it down. Then I asked if I could have some too. He filled my bottle to the top. I thanked him profusely, told him I was so glad to have the water. I didn’t want to get dehydrated. He said he knew how that was, and it wasn’t very good. Big smile. I didn’t ask his name. Publicly thanking him here—unnamed kind young man supplying just what I needed most at a time I thought there was no way I could get it.

The water brought life back into my limbs. We resumed the climb with renewed energy. “Half log. Step up. Rock sticking up. Stay left.” We were out of the sunshine and into the shadows. I put my coat back on.

“Three half logs. Rocky ground ahead.”

I kept my head bent, face toward the trail, eyes on the dust directly before my feet. How much further?

“Oh, what a cute dog!” The voice was lilting and silvery. It was joined with others equally sweet. I looked up. Ahead was a cluster of three fresh, young Asian faces. They had matching sunglasses, glossy black hair, and big, bright smiles. As we approached, they greeted me with a flurry of questions about the dog. I stopped.
“Hedy. Yes, she’s a girl. Ten. Well, almost ten. Her birthday is Valentine’s Day.”
They oohed and aahed as if they were viewing a lovely vista.
“May we pet Hedy,” they asked.
I explained that the harness is Hedy’s business suit. When she wears it, she knows she has to pay attention to business. Then I took Hedy’s harness off. Instantly Hedy changed from vigilant guide to waggy tail and happy face. They descended on her, delighted to stroke the velvety black coat.

Cheryl, Dewi, and Ying were from Singapore. Former high school friends having a holiday visiting the one who was attending college here in the U.S. They were sweet, well-mannered, and astonishingly bright, their comments insightful, their demeanor delightful. I told them I would include them in my post. They giggled and said they were going to be famous. Dan took a video so we would have their names right, and some photos to celebrate our meeting in this monumental place. When we resumed our walk, it was as if we had rested a week.

The girls were soon far away, tiny on the side of a great cliff. Dan took a picture of them waving.

And then remarkably, suddenly, we were at the switchbacks. Then we were in view of the stone-flanked entrance to the trail. We were done. Really? Already?

Others who had shared the trail were resting under trees here and there. We greeted each other. It was a fellowship of triumph, exhilarating for me who has never been very athletic. Dan told me a lot of the hot shot hiker kids were surprised when they got to the Point and found me there—a little old blind lady with her dog. He thought that was funny. Apparently it didn’t take youth and virility to accomplish the trek.

I didn’t see it. But what I did see was how kind and thoughtful everyone was. There was an awareness of each other, an etiquette of watching out for one another. Many countries. Many languages. Everyone respectful, enjoying the journey and the view. A whisper of how it’s supposed to be…

I wondered how the young trail-mender picked us to offer his water. Could it have been the service dog or the skunk streaks in my hair? Or the raincoat and sandals that showed I really wasn’t a hiker at heart? There was none of the supernatural disappearing that evidence the intervention of angels, but to the degree that angels are messengers from God, I would say I got the message loud and clear: There is help when there appears to be none possible. Water can come from rock.

I saw how a few minutes with wonderful young people could bring such refreshing and joy that the last upward stretch of trail could feel like nothing at all. And that even a blind person pushing seventy could do something she never thought she could because of the careful guidance of a dauntless canine and a trusted friend who narrated the obstacles every step of the way.

Dan says I don’t know how to sit on my laurels. I go from one book to the next. There’s always another project in the queue. But this time? I’m sitting. I’m doing a little crowing. I’m reveling because I walked on a narrow ledge down a steep canyon wall and back again with my dog and my friend and a lot of beautiful strangers in a memory I will hold in my heart forever. And the canyon was nice too. 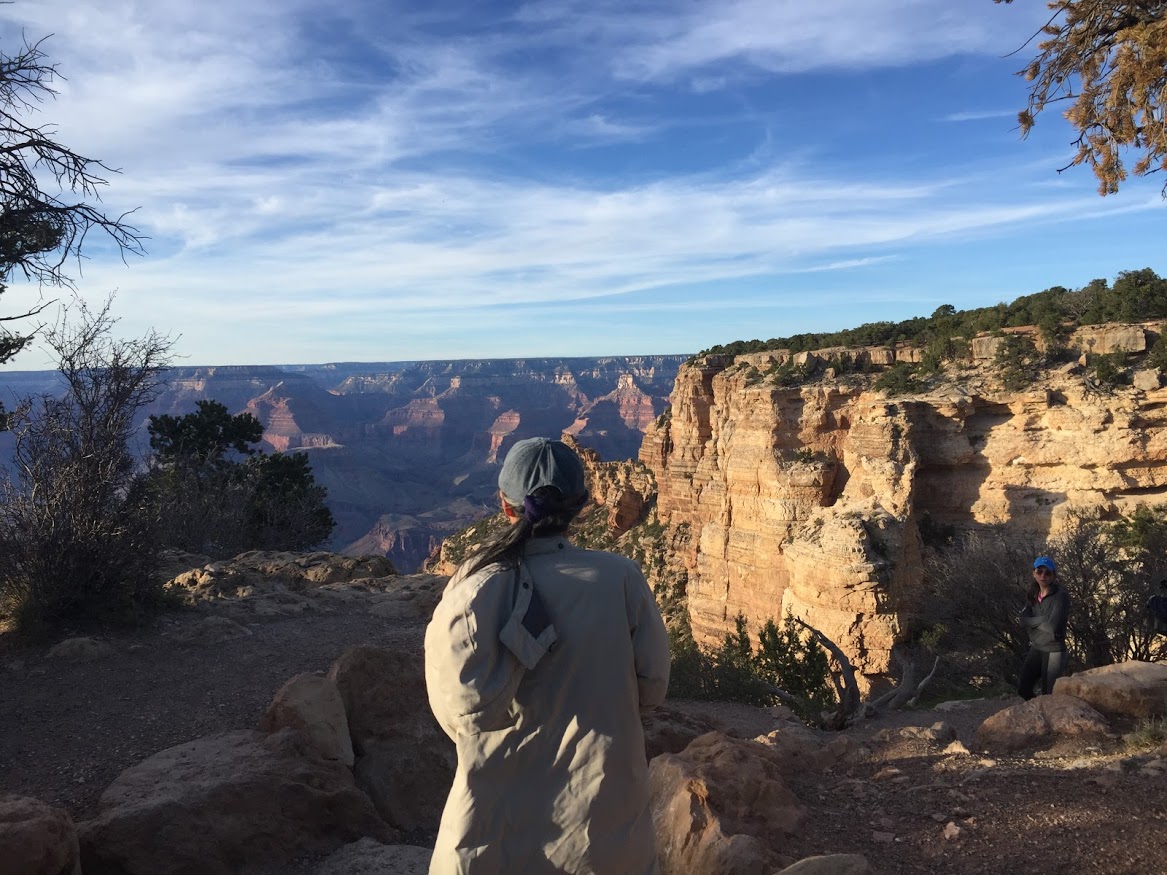 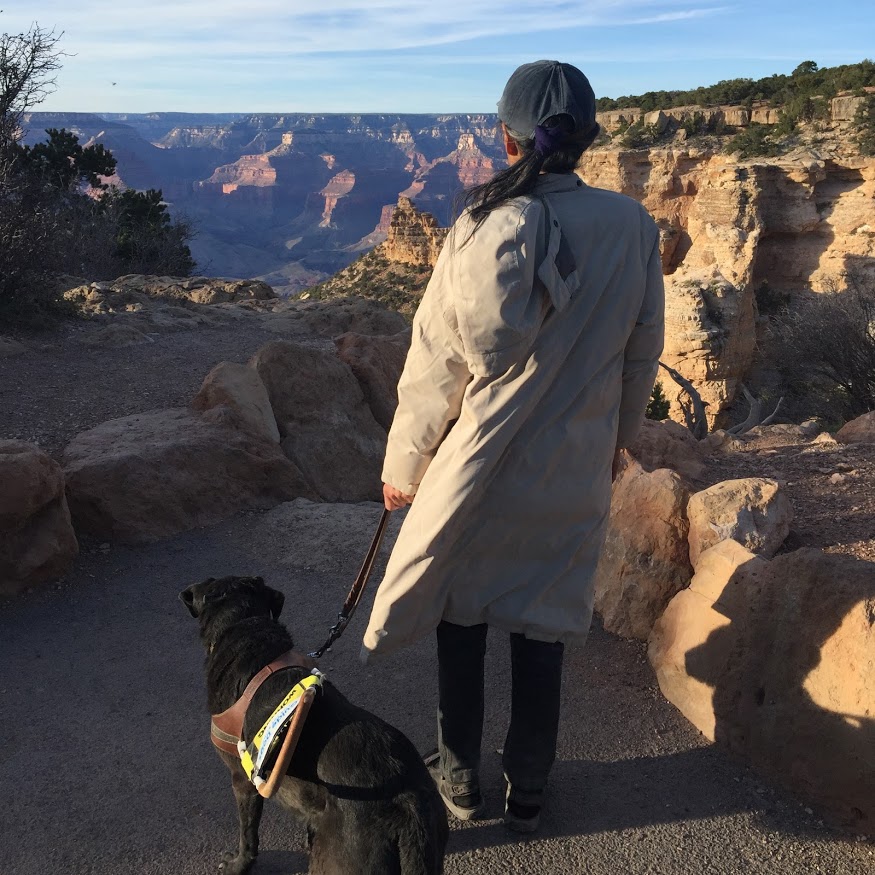 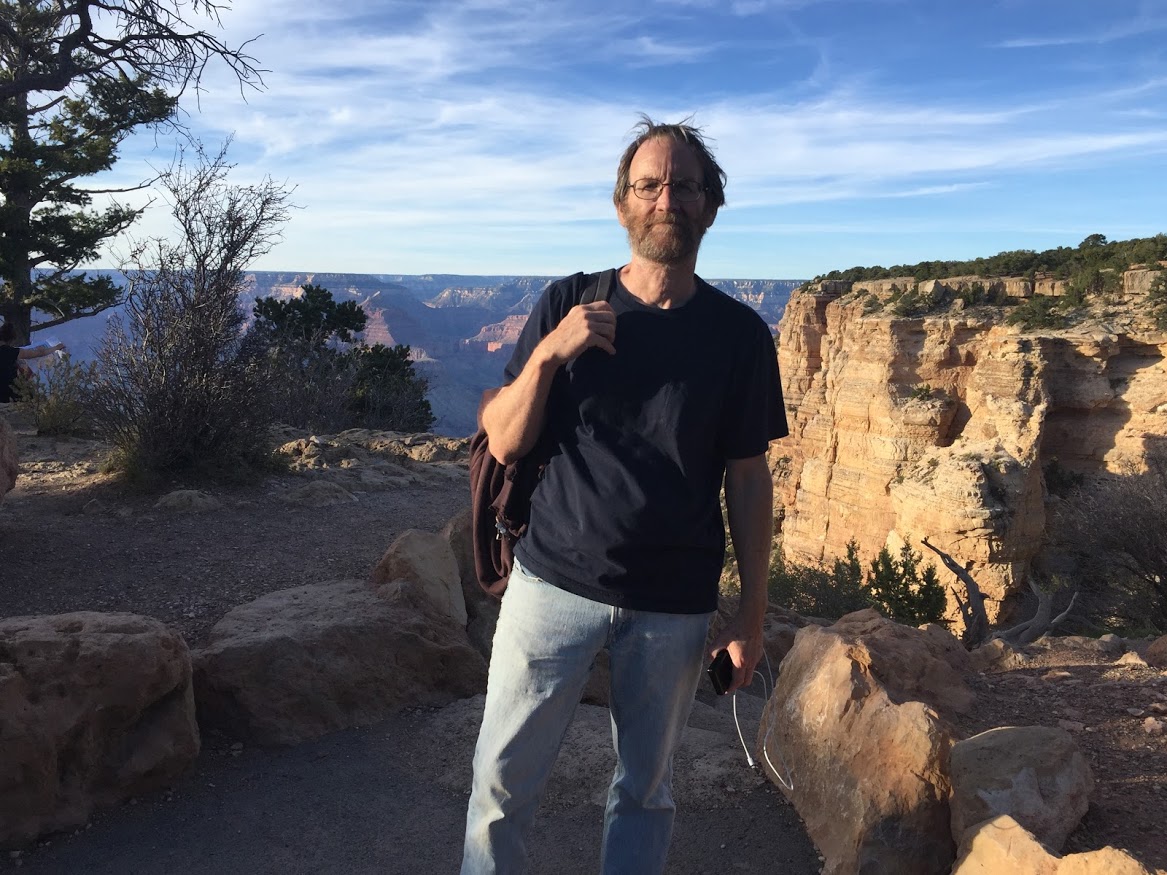 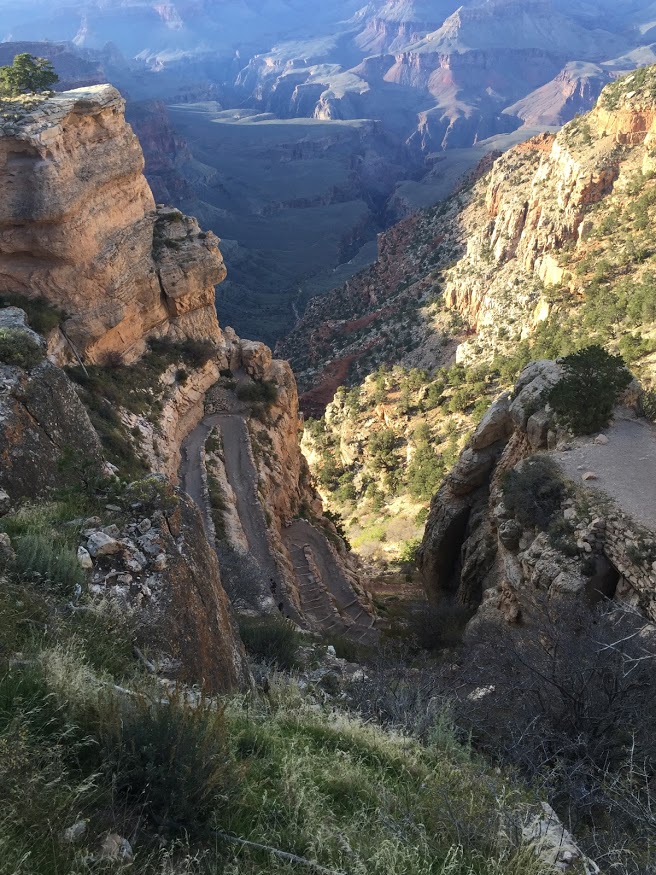 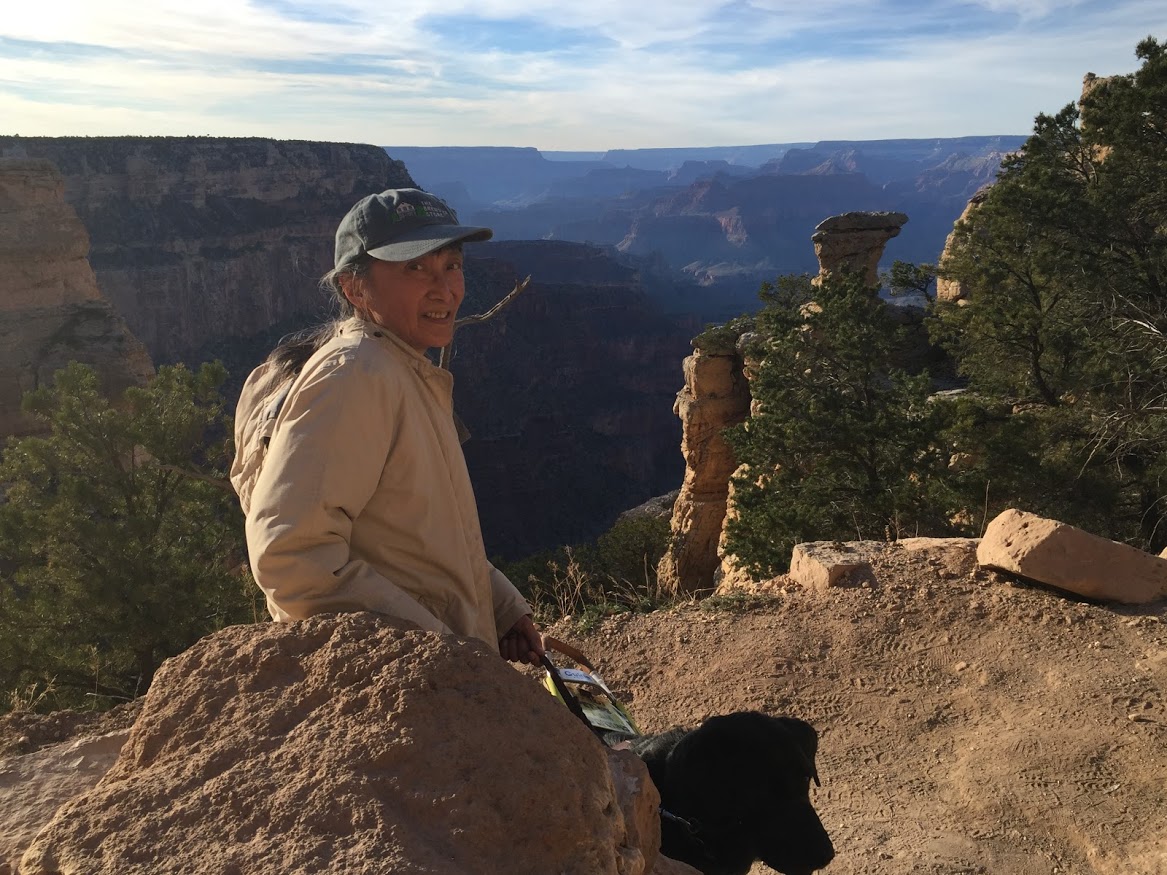 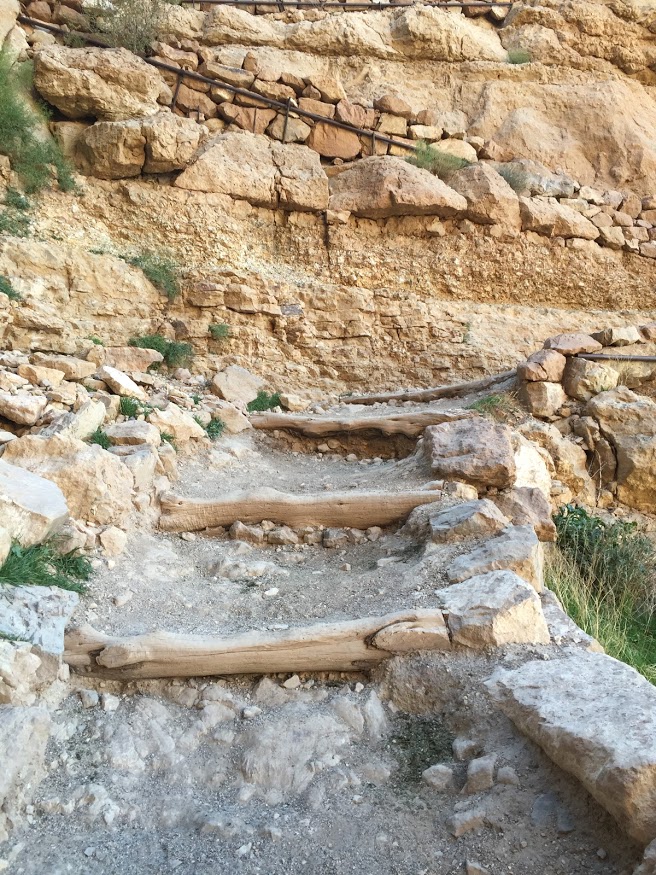 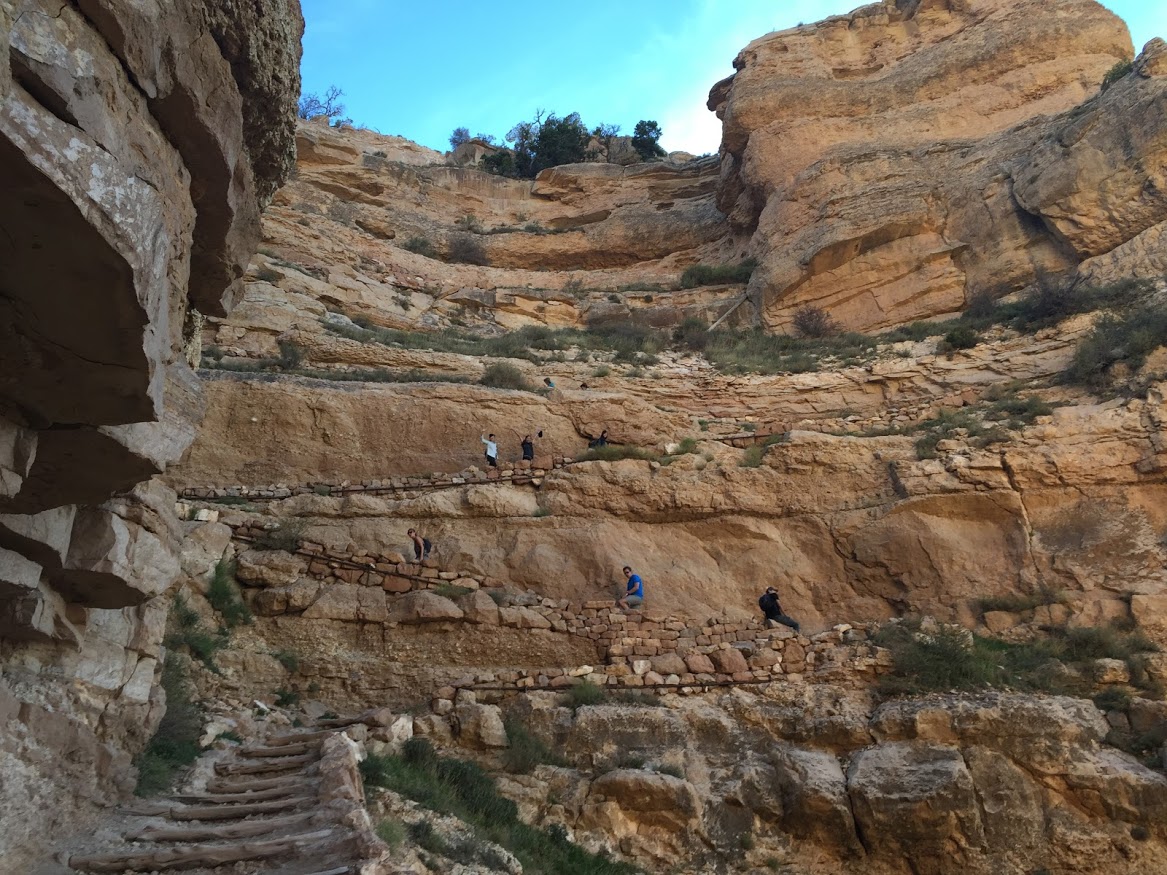 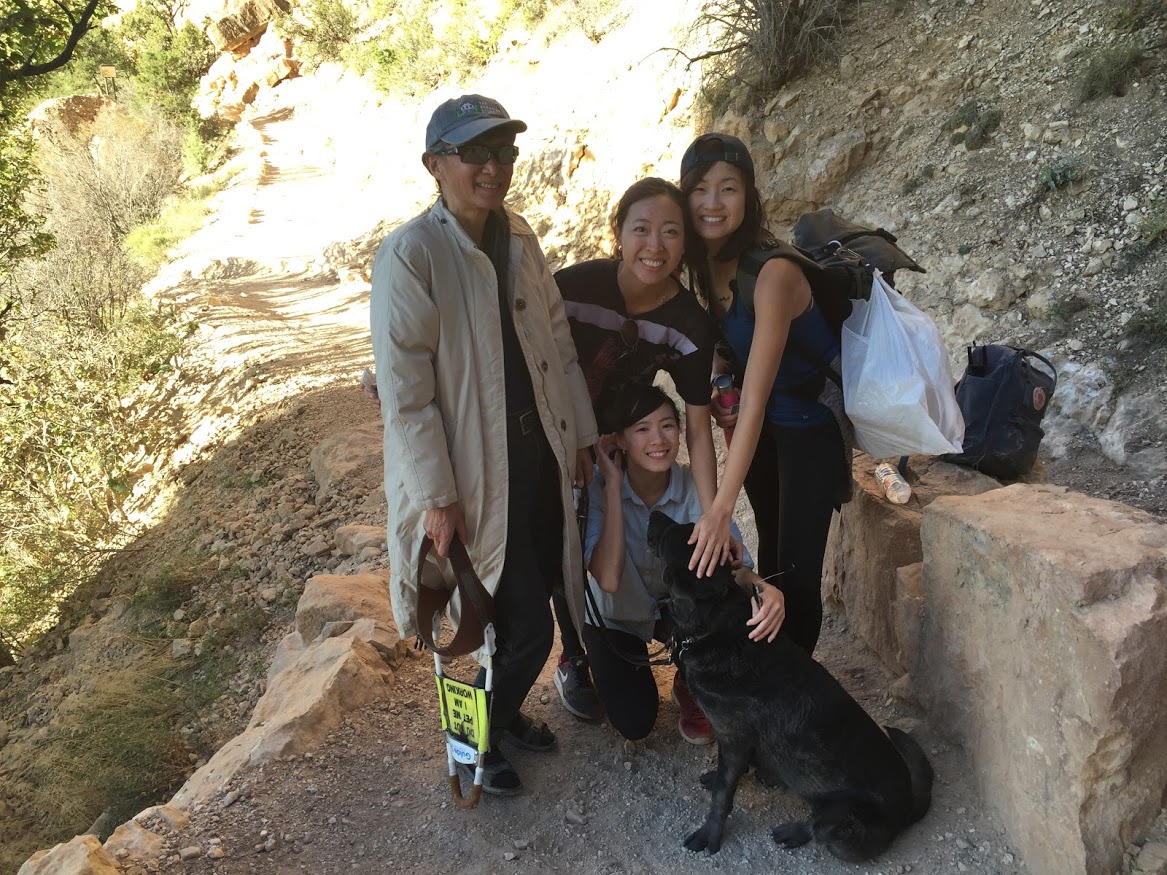 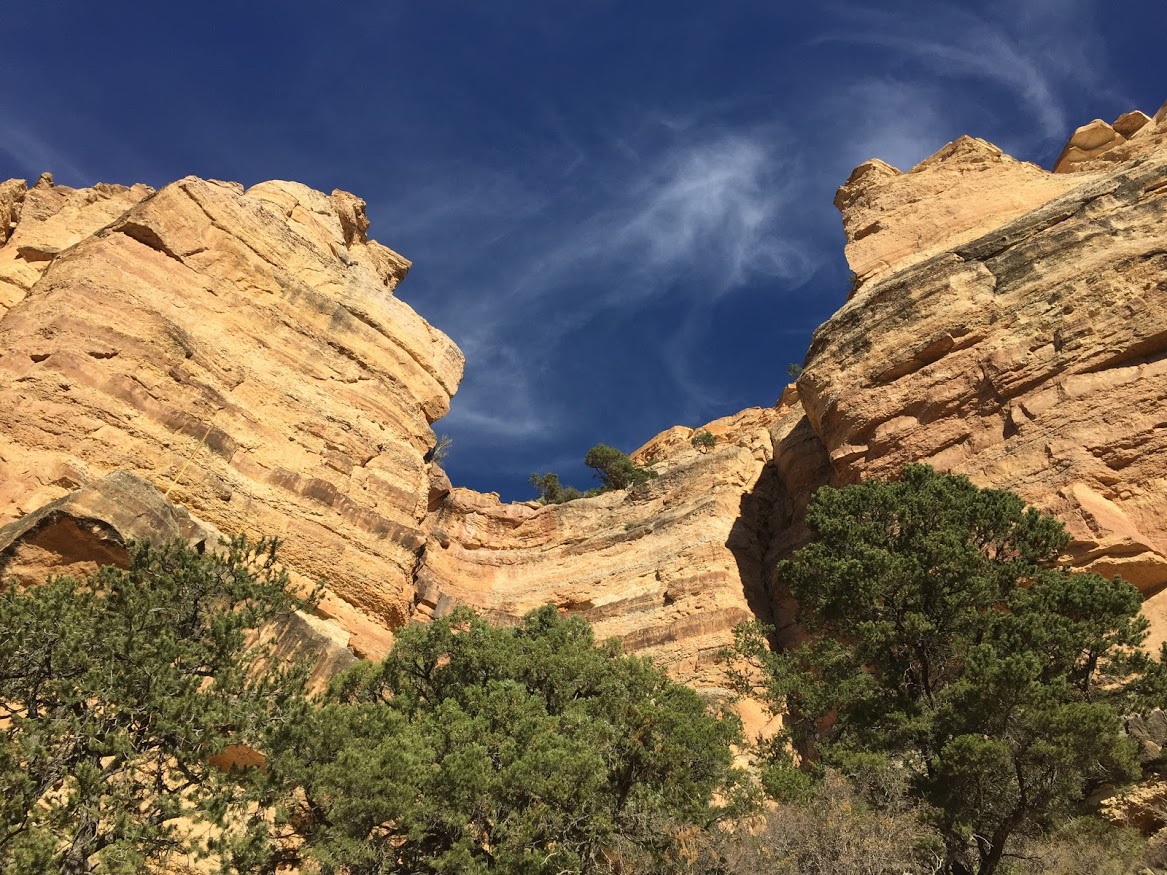 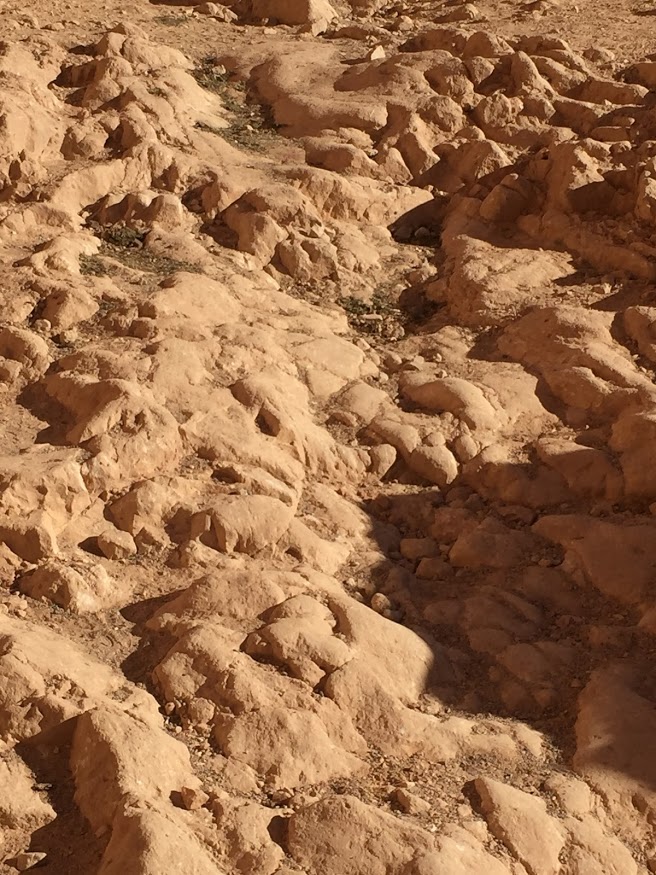 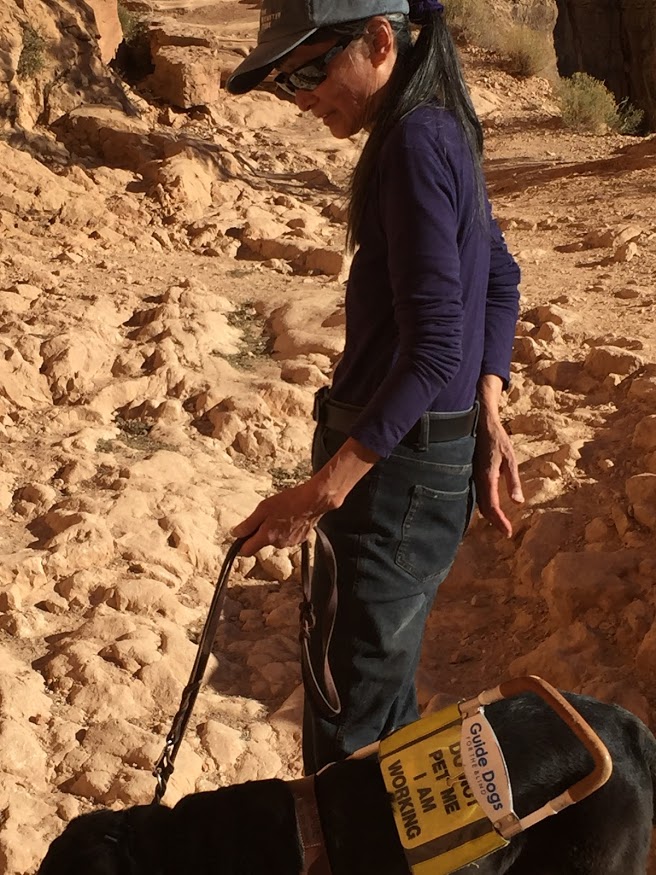 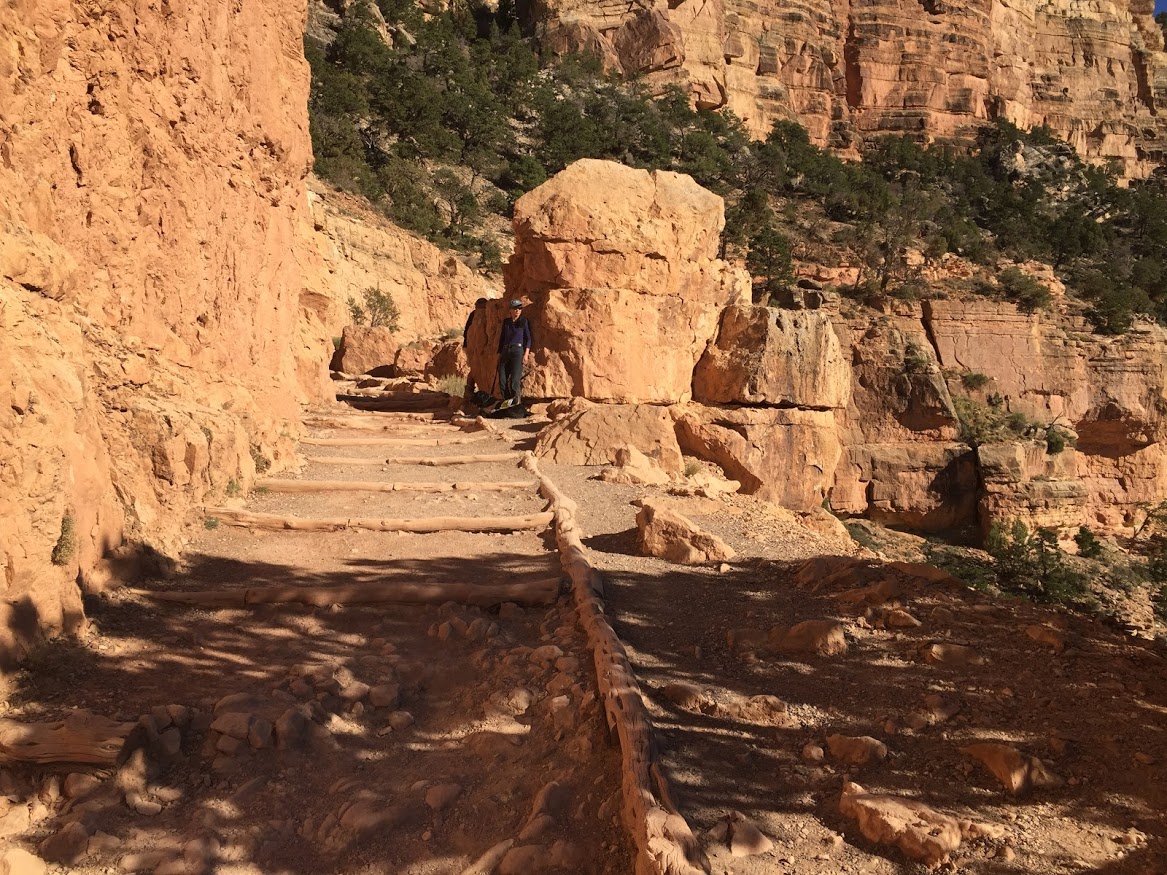 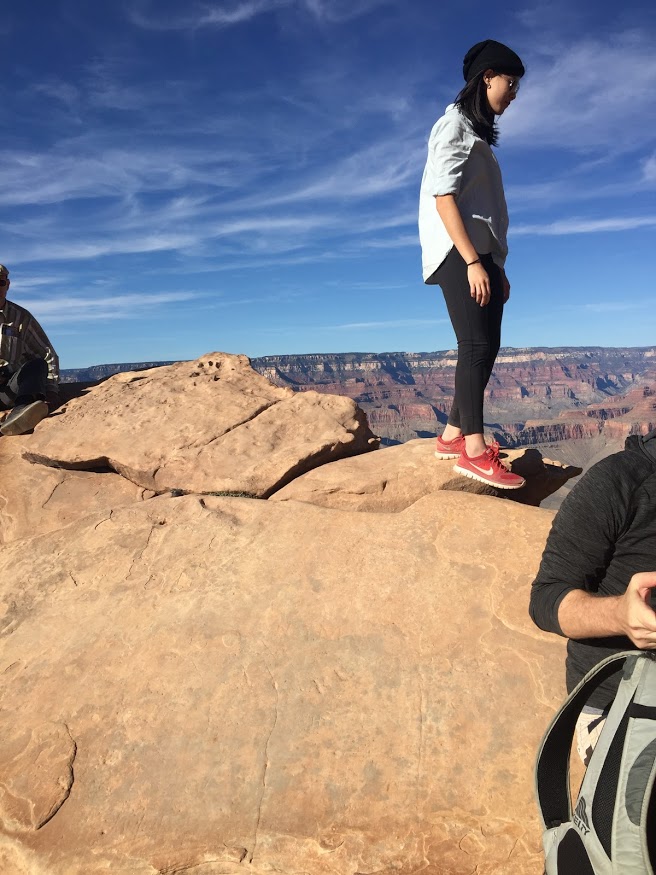 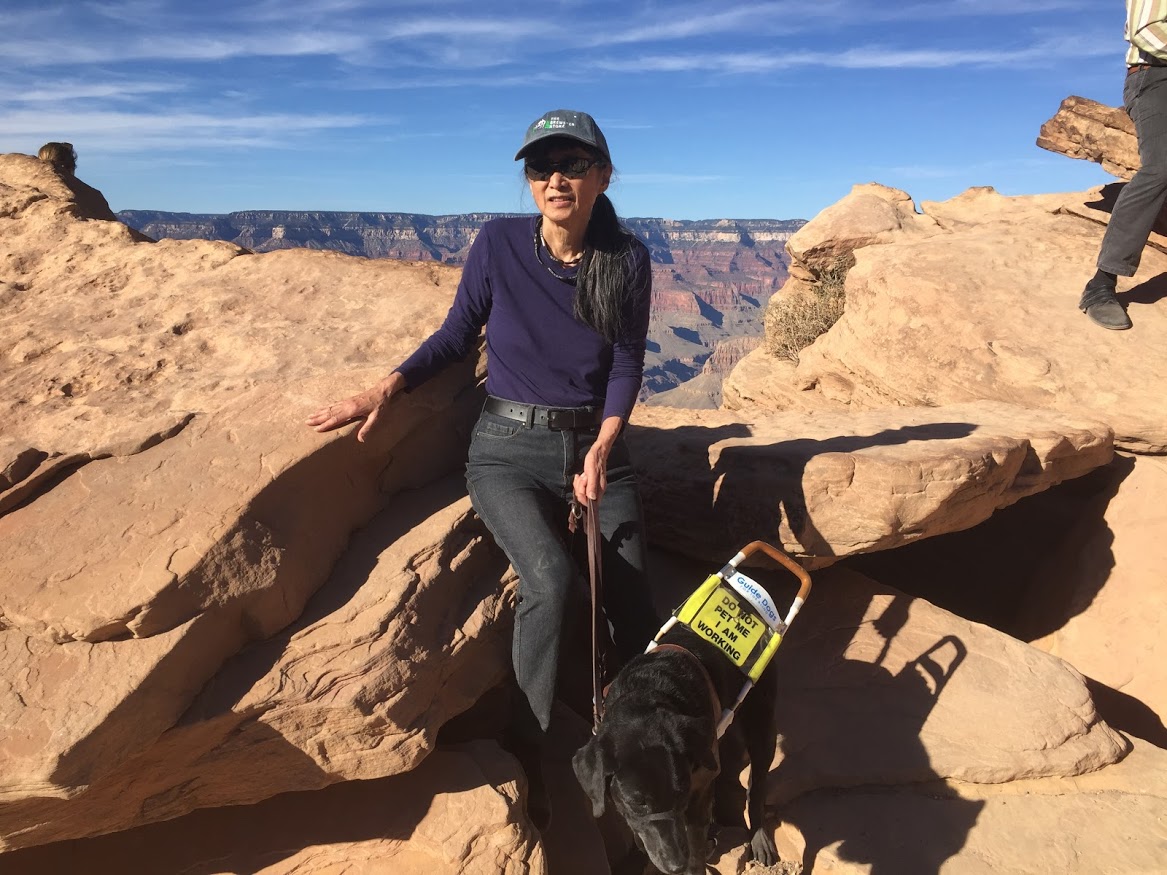 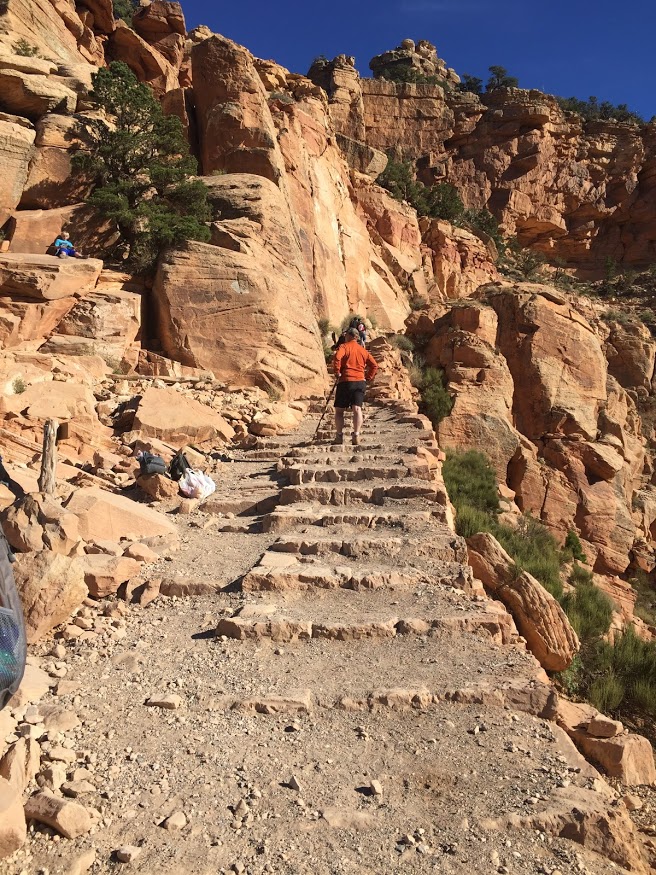 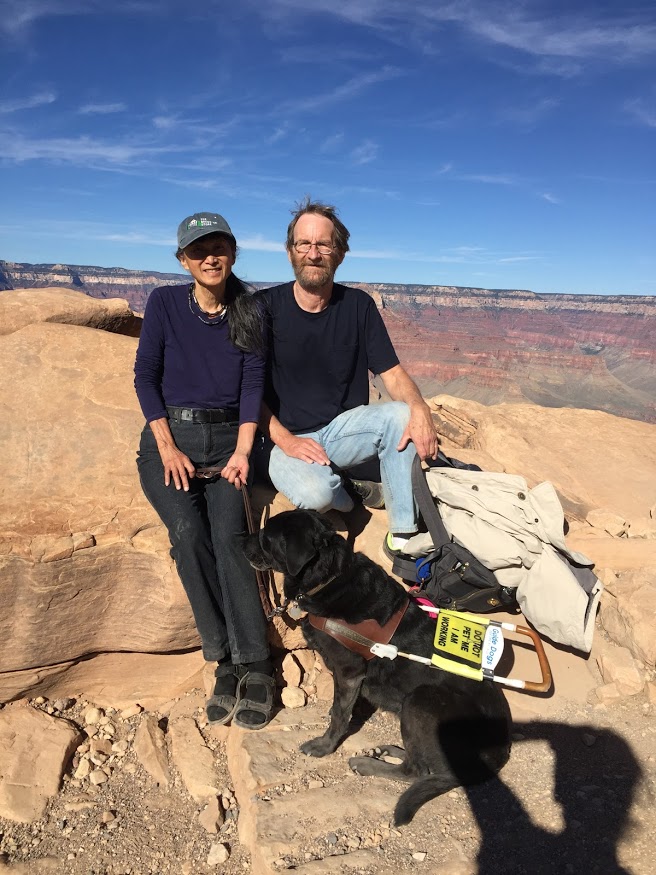 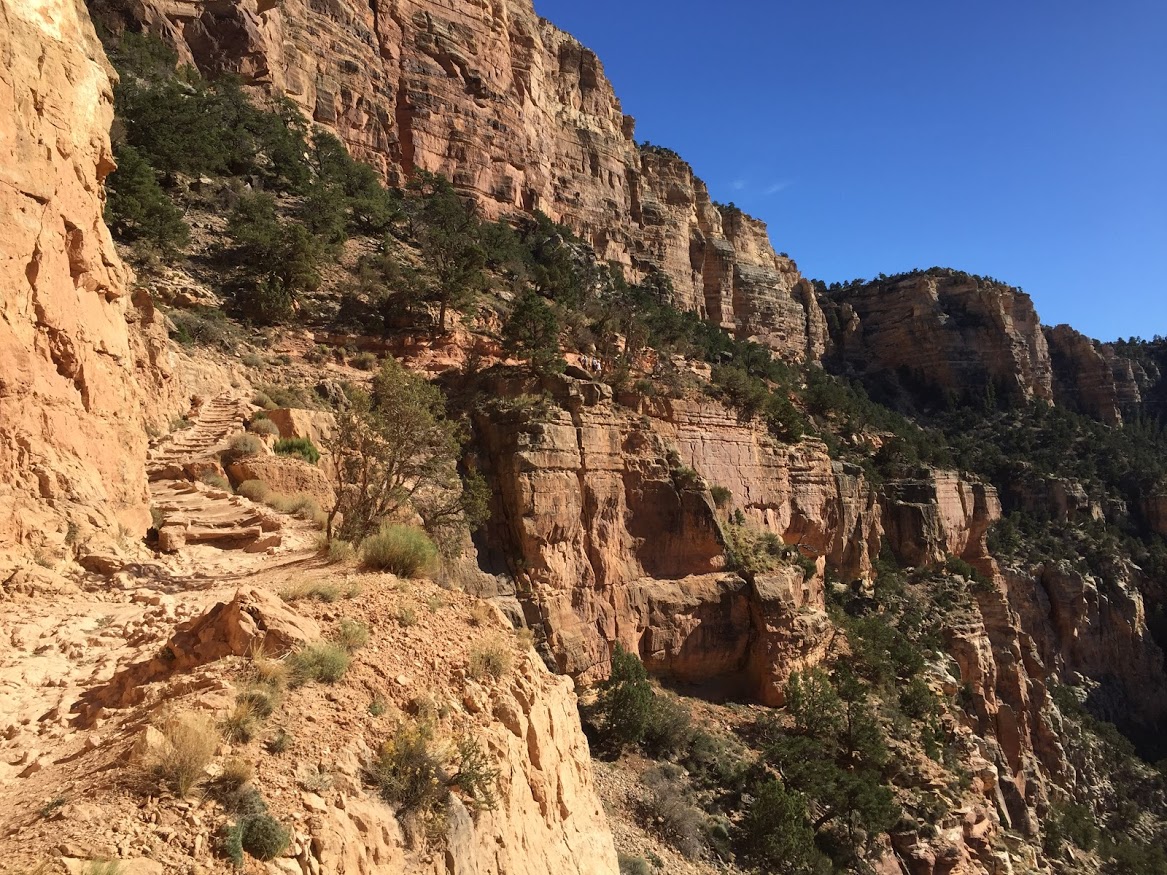 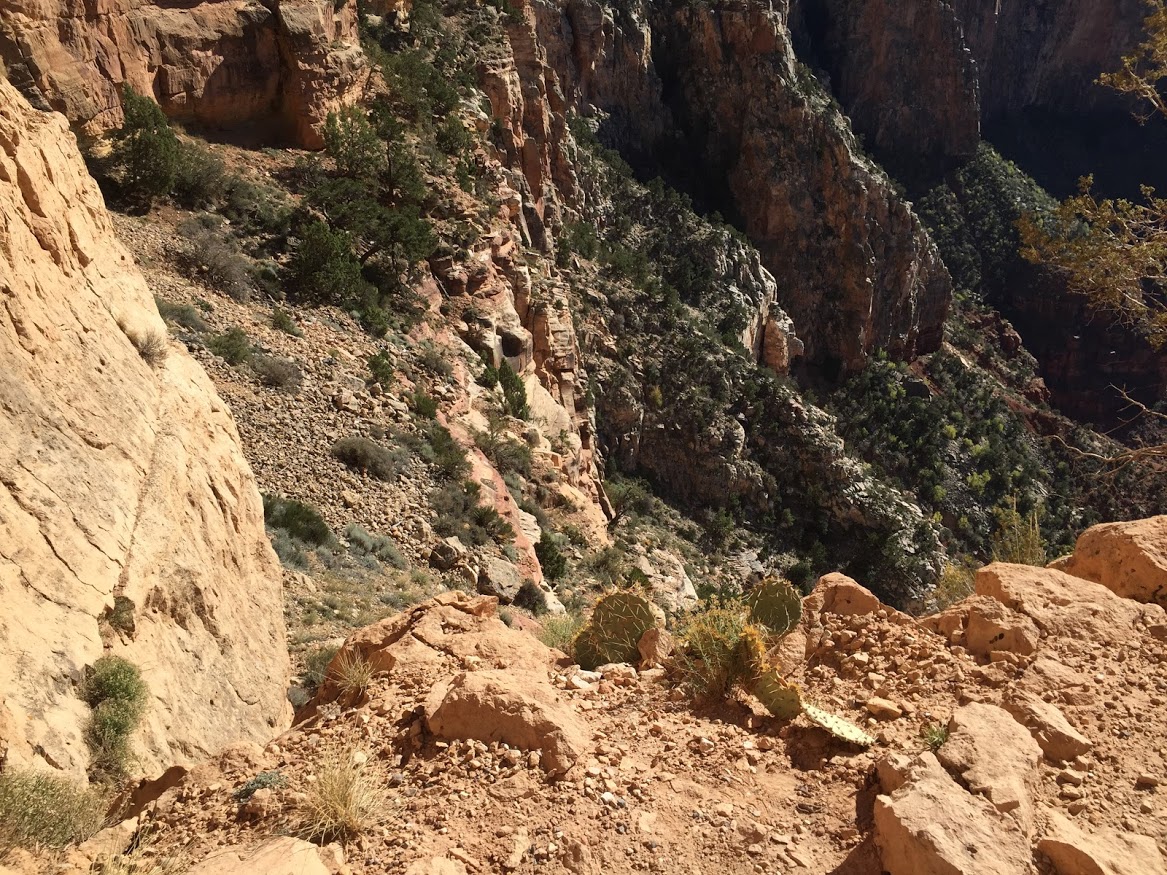 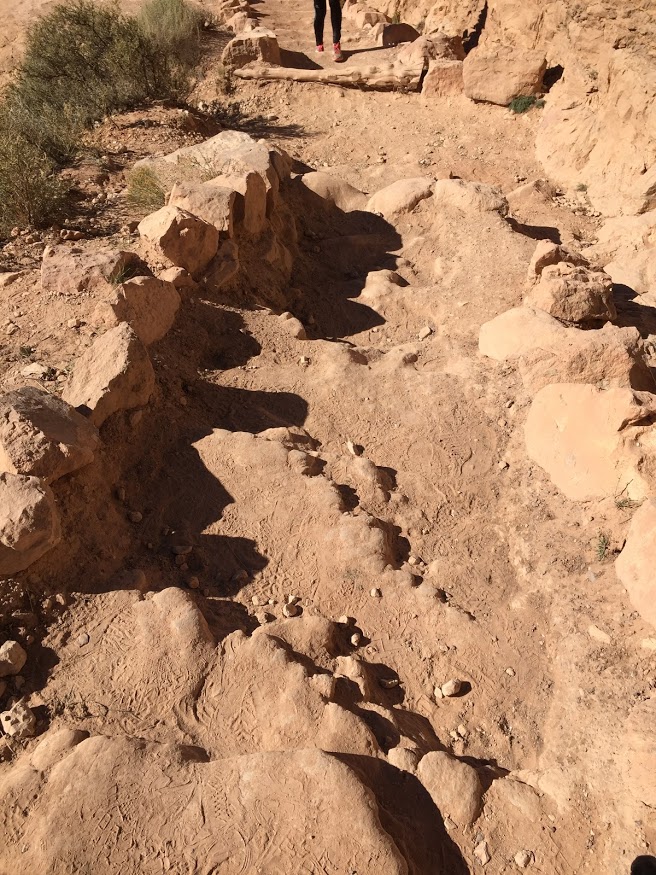 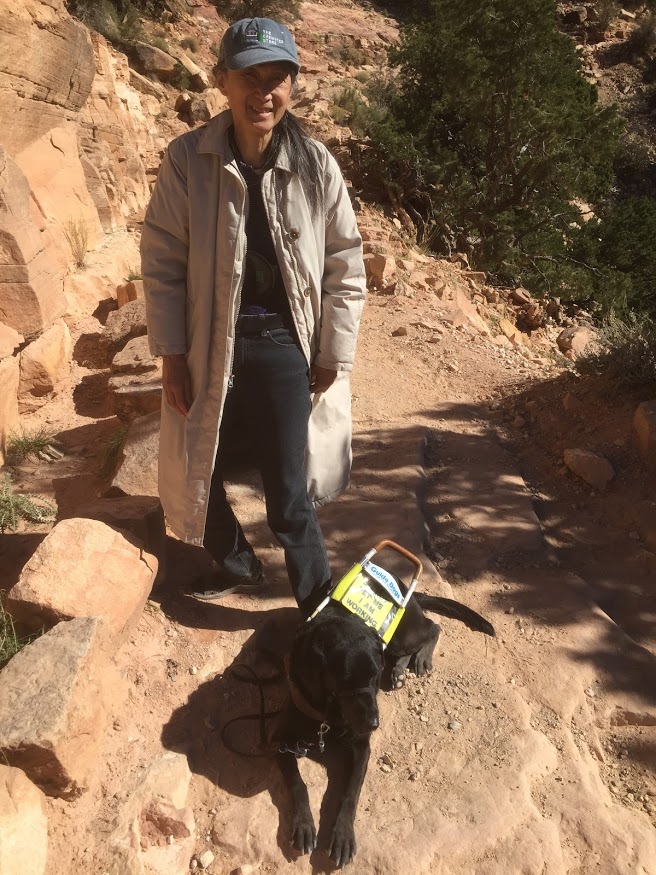 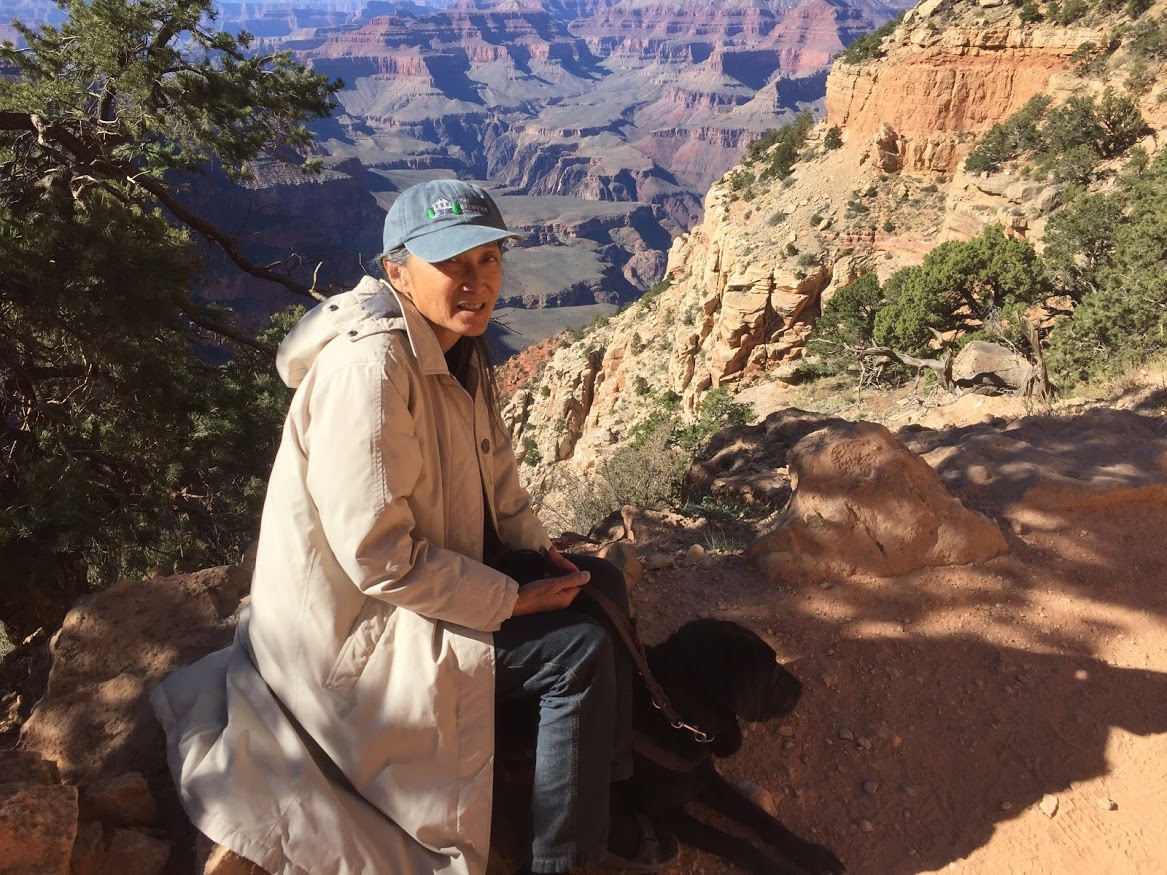 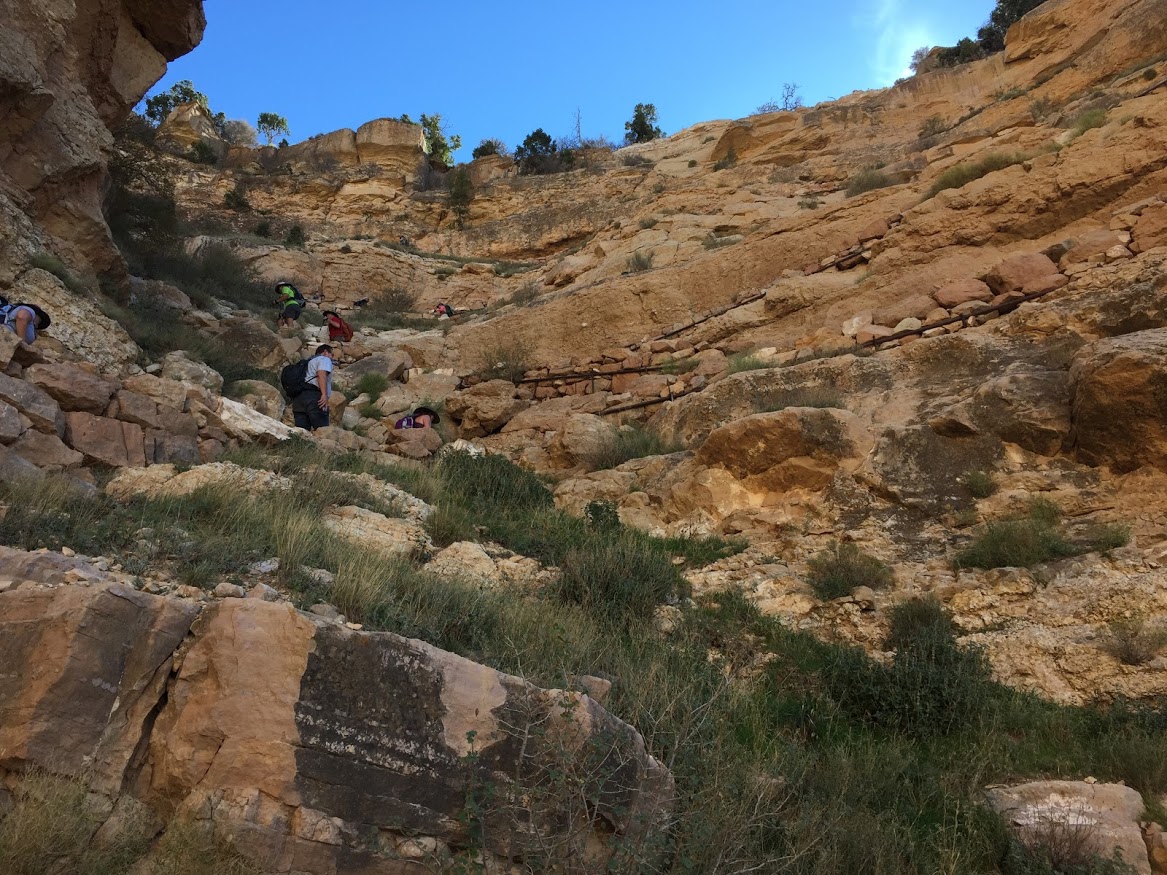 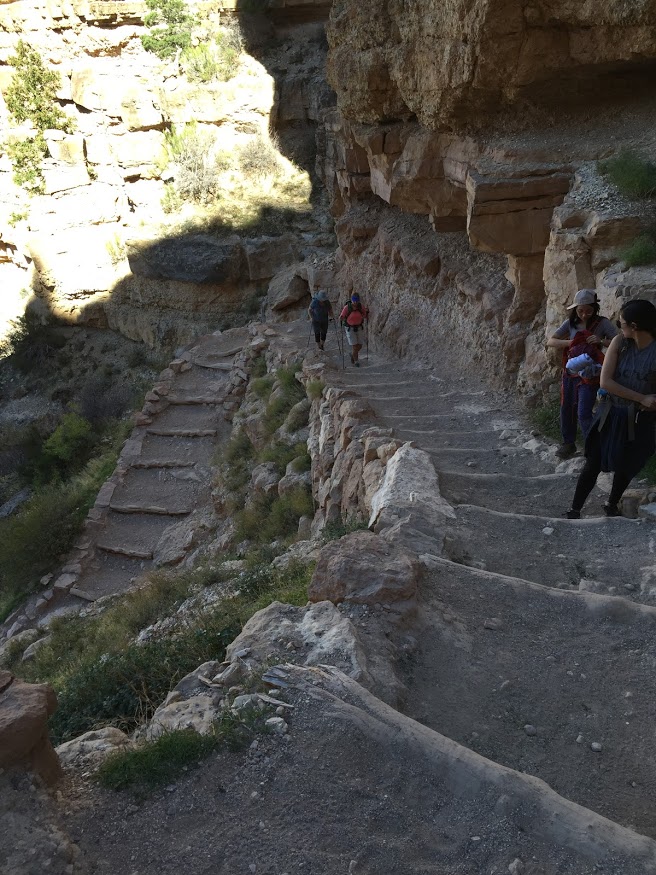 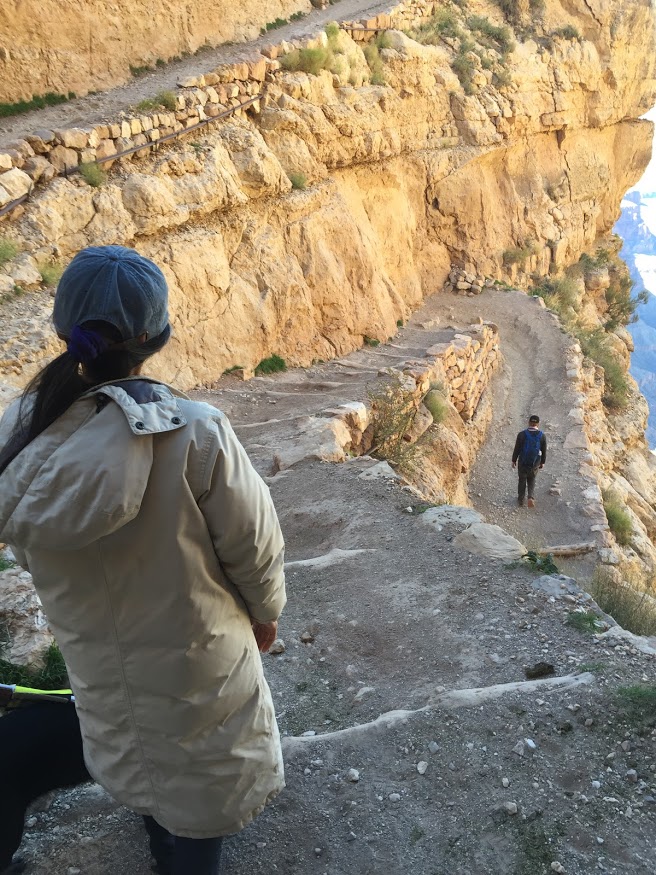 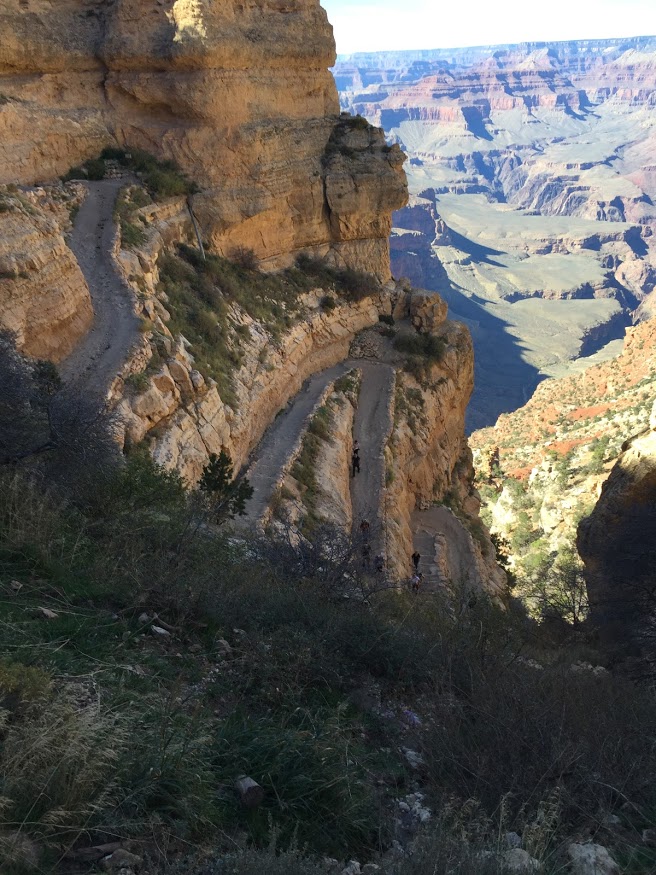 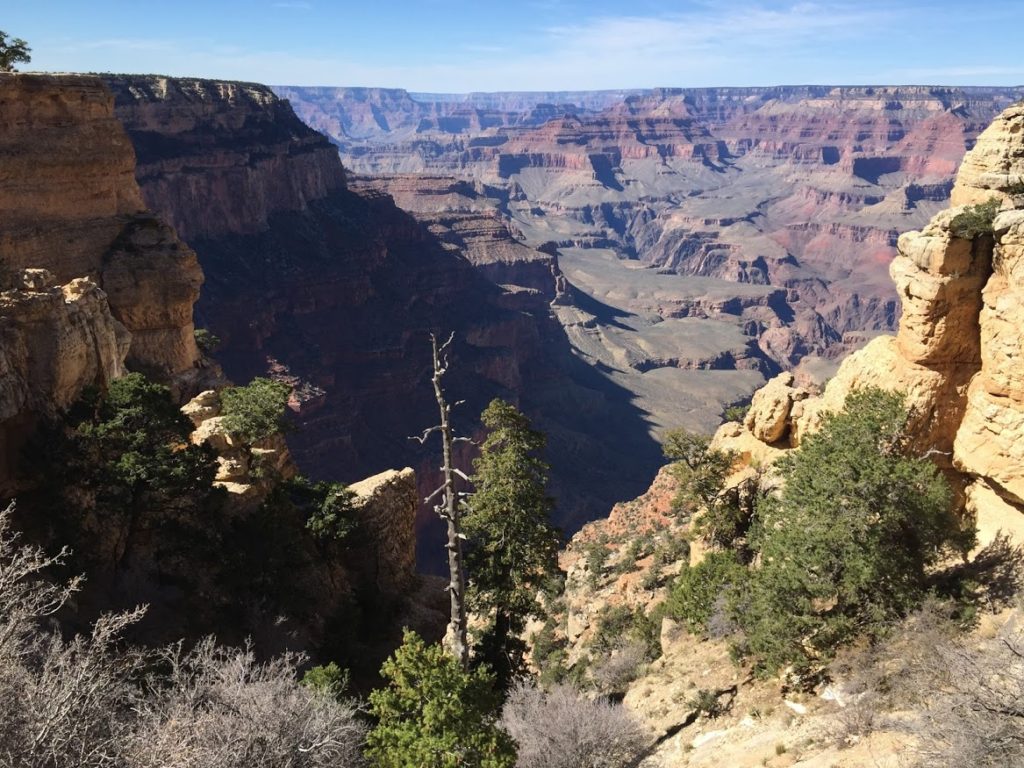 Stories from the Cutting Room Floor   Does She Ever Get To Be A Dog?