The Rocky Fire had been growing for days, shocking even seasoned firefighters with the speed of the spread. Across the lake, I could see an orange glow in the night sky and bright spots of intense light big enough that even I could see them. “Looks like Mordor,” Dan said.

Ash has been falling in our yards. In my car, there was ash on the seats. Windows had been left an inch down because of the heat. Not a big opening. Even so, ash got in.

Yesterday, my friend Lynne called to ask me to pray for the people in Spring Valley and Double Eagle Ranch. She knew people who lived there, and they were facing immediate evacuation. Then she told me something that surprised me. Four people at her church, all living in different locations in the south area, shared that they were right in the line of fire, but when they prayed, the wind whipped around and drove the fire away from them.

It reminded me of what happened to my friend, JoAnn. She was living in South Alabama at the time. As she tells it, a tornado ripped down her street causing tremendous damage to homes, “until it got to my house where it turned and went on down the street. It was amazing! God is good!“

I’m not saying that everyone who prays escapes disaster. I’m just repeating what my friends told me. Last I heard, the people in Spring Valley and Double Eagle Ranch had to evacuate. Did their houses burn? I don’t know. If they did, is God still good? That’s what people have to decide for themselves. As for me, I’m learning that God has three answers to prayer: “Yes,” “Not yet,” and “I have something better.”

I’m not saying this in a flippant way because the fire rages in the distance. I live on the side of a volcano. Fires can start anywhere. And if my house burns, will I still think God is good? Will I still believe He loves me?

So far, we are safe. We’re staying out of the smoke as much as possible, and the weather has cooled down considerably. I took this picture at nearly 2:00 p.m. this afternoon. It was suddenly so dark outside that it looked the way it does at 9:00 p.m. I thought it was the smoke, but it was clouds. We even had a few drops of rain. 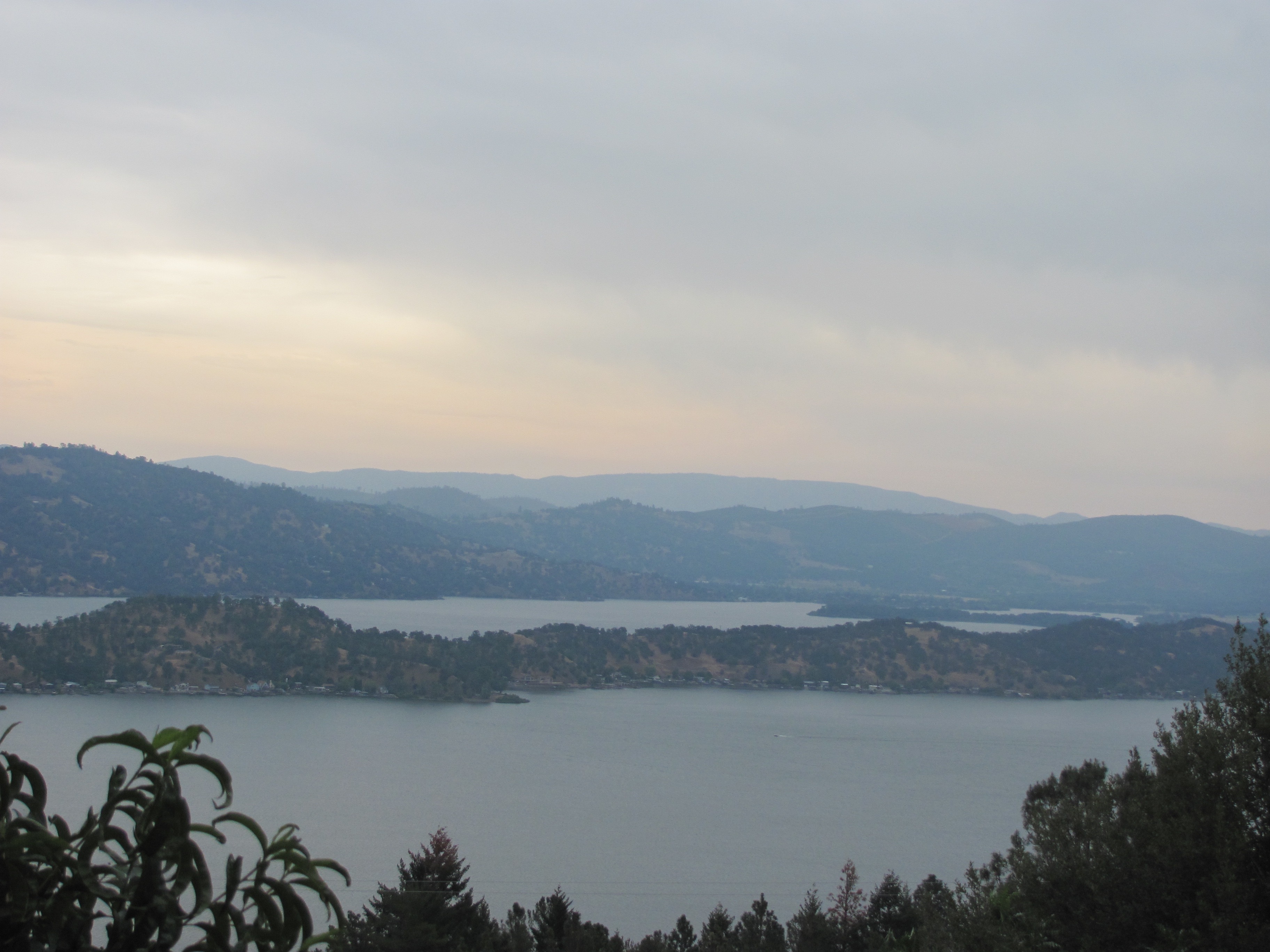 As you may know, we were hacked last Thursday. Both earthen.com and my personal website, carolynwinggreenlee.com, were offline for days while Dan stayed up literally night and day to get us back up. Today, he told me my website was up, and if I wanted to write something, he would post it. He had also put up some of my papercuts from “Speaking for Fire,” the children’s book by James BlueWolf that I illustrated.

As I looked at the illustration with the bright pink Fireweed, I remembered being on Mount St. Helens the year after the eruption. I had read that the first thing that appears after a fire is Fireweed, and I was curious to see if it was so. As we drove up the sides of the mountain, it was truly a desolate sight. There were still dead trees and ash everywhere, but that giddy pink was everywhere as well.

In “Speaking for Fire,” James BlueWolf tells how Fire, which seems so destructive, brings about renewal and new fruitfulness. In truth, without fire, undergrowth becomes so thick that a fire that happens there will be practically unstoppable. That’s what we keep hearing from firefighters who are battling the Rocky Fire. I suppose we can see the symbolic application to our own lives—things that are dead and overgrown needing to make way for new beginnings—but another story comes to mind.

The story goes that there was a rancher who lost all his stock when Mount St. Helens blew. Ash covered the land and killed all his cattle. That might have flattened him, too, except he was a glass blower, and when the ash covered his pastures, he gathered it up and stored it away. Every year, he puts some of the ash in the glass, a different formula each year. His glass is collected around the world. That’s how the story goes, anyway.

When I was on Mount St. Helens, I bought a glass ball in ultramarine blue, one of my mother’s favorite colors. The tag said it was made with ash from Mount St. Helens. My mother was very ill by then, and already bedfast, but she still loved beautiful things, so Daddy hung the globe in the window where she could see the light coming through it. I told her that her future was vastly different from what she thought it would be, and this lovely glass was to remind her that Jesus would still give her beauty for ashes. And He did. The last six months of her life were the happiest of all the eighty-two years before, and though she could no move, eat, or carry on a conversation, she was profoundly and deeply whole. Beauty for ashes. It’s His specialty.

Supper with Him   Papercuts from “Speaking for Fire”